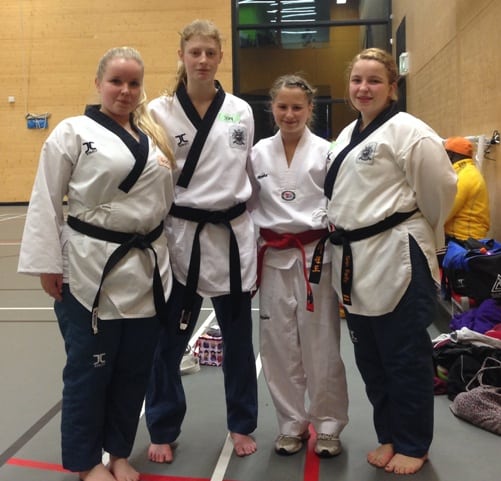 Following on from the development that has been made this year by the poomsae competition squad it was an honour to be invited to the national open poomsae trials held by the national poomsae coaches on the 1st December.

4 members traveled down to Horley to train with Master Sumner, Master Biescas and Master Morrison alongside the current national poomsae squad. They had the opportunity to train in not just regular solo poomsae but also in synchronised pairs and teams as well as take part in a freestyle gymnastics session held by a local freestyle gymnastics team.

The trials showed the signification development the club and members have made in poomsae competition over the last year and identified the areas we can continue to focus on in the near future.

Poomsae competition training will be continuing next year so why not come along and also get involved?

It is also with great pleasure that we have now heard that following the trials, Amy Stock has been selected to join the National Squad.   This is a fabulous achievement for Amy and a honour for the club.   Well done, Amy!