The club took 5 cadet (11-13) players to the Dorset Open on the 30th October.   Even though the entry for the tournament was well down on previous years all of our players had divisions that avoided mergers and so they had the opportunity for good matches.   The spirit from the team was excellent and there were a couple of outstanding performances.

Alex Stock unfortunately went out in the semi final.   Having trained in the seminar the previous day, maybe the legs were a little too tired?   However despite his personal disappointment he continued to be up there supporting his team mates as they played.

Kamil Nowak had an excellent match in the semi final despite giving away a serious height advantage!   The match went back and forth during the 3 rounds and eventually tied 15-15.   Unfortunately Kamil then missed out on the golden point, however he showed great improvement since his previous tournament and was unlucky not to make it through to the final, at least.

Mujahid Baksh was entering his first tournament at this level. Having got a bye to the final he started a little slow allowing his opponent to establish a lead.   During the final round he settled well into the match and pulled back several points.   However time wasn’t on his side and the match finish 6-5 to his opponent.  Good result though for first time out at a non-club level.

Neo Botha’s match was unfortunately cut short.   Having got a bye to the final, Neo open up aggressively with a number of attacks to the head which narrowly missed and was running slightly behind at the end of first round.   However, her opponent then had to withdraw due to an injury sustained in the match as a consequence of blocking using open hands.   Neo was therefore awarded the Gold.   Neo was on good form and I have no doubt she would have won in normal play so it is shame that her opponent sustained the injury and we wish her a quick recovery. 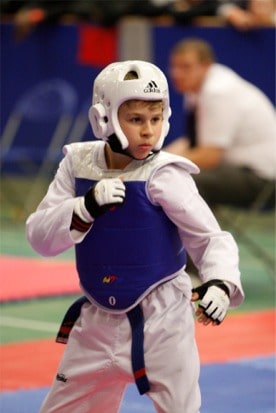 Despite having not competed for a while, Alex Newman, came out in devastating form.    First up on the day, he won his quarter final with a 12 point separation and then repeated this in the semi-final. The final was a tougher affair with Alex taking a number of headshots, however his speed and focus ensured that he continued to build a steady lead with excellent movement and simple clean body shots eventually reaching a total points tally of 30 – a club record in a single match.  Eventually this took its toll and the opposing coach threw in the towel.   Excellent Gold, well done Alex.

Many thanks to all those who came down to support the team, to Lynne for coaching and to Alex Walker for managing the players and their warm ups.