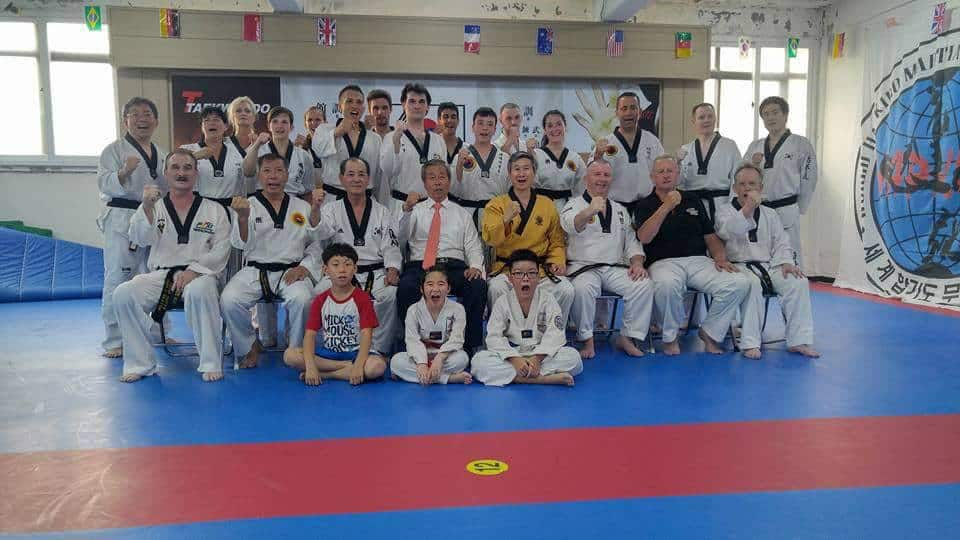 I have just returned from the 2nd Annual World Taekwondo Chungdokwan Federation Summer Camp in Seoul, Korea.  This brought together Chungdokwan practioners from around the world with attendees this year from Ireland, Switzerland, Belgium, Portugal, India, Indonesia, Malayasia, Hong Kong, China, Japan, USA, Ethopia, Saudi Arabia and the US. It was an amazing opportunity to train will fellow Chungdokwan practioners and particularly poinent as we remembered GM Uhm who died last month after being head of the Chungdokwan for 58 years and who made such an important contribution to the spread of Taekwondo as both a martial art and sport across the world.

Arriving in Korea on the Thursday morning brought a few hours of rest before the ‘earlier arrivers’ headed over in the evening for a couple of hours of training with GM Shin hosted at GM Choi’s World Hapkido Martial Arts Federation’s dojang. An invigorating session of PT (especially with some deep ‘core’ work) and a focus on basics and poomsae

that set the scene for the coming days. As well as working through a selection of kup poomase, we had the chance to work through all the dan poomsae from Koryo to Ilyo.

Friday was a rest day and for me personally a really enjoyable one as I had the chance to catch up with Neo Botha, a long term club member, and her father Hano.  Neo is now living back in South Africa and was in Seoul with the South African National Team training and competing for a month.  So great to catch up and shop together for gifts in Insadong.

Friday evening was registration, and a meeting of the masters to review the plans for the next few days.

So day one of the official camp kicked off Saturday morning with a short underground trip to the Korean National Sports University.  The morning started with PT with the emphasis on developing an understanding of the key foundations needed for good basics.  This flowed into a poomsae session that started with work on basics with time spent particularly on acceleration and hip rotation.  This was then applied as we progressively worked through poomsae from Taegeuk El Jang to PyongWon.  This session was led by top Korean instructors with excellent group and individual feedback.  I personally benefitted from being in the middle of the front row, so target practice for lots of the demonstrations! 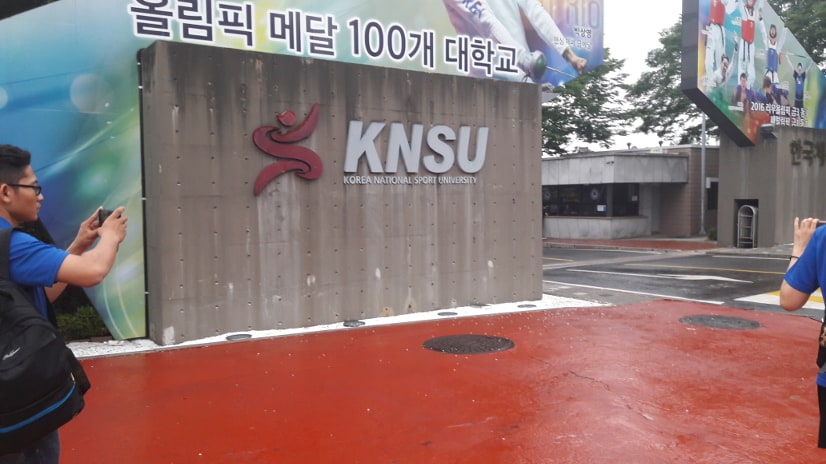 inations to work on distance and speed.  Finally, the afternoon finished with a lecture session on the spirit of Taekwondo and ensuring all the participants understood the tradition of the Chungdokwan and the need not to lose the essential meaning of the martial art.

It was then back to the hotel to quickly freshen up (it was needed!) and then to the opening ceremony and dinner.  A chance to mix and catch up with friends.  GM Park Hae Man was also introduced as the new President of the Chungdokwan and spoke about his vision to strengthen the Kwan, to continue to strengthen this summer camp and competition as an annual event and to welcome this years attendees.

Sunday morning we all headed over the Kukkiwon (the world headquaters of Taekwondo) for training and a poomsae competition.  Unfortunately there a grading at the Kukkiwon in the morning which overran and so delayed our training but we did get going with practice on high dan poomsae in a side hall before moving onto the main Kukkiwon floor to practice for the competition.  The competition was split into solo and synchronised.

An unusual format for the syncronised was that each country would perform two poomsae of their choice, with the UK (myself and Master Kambiz Ali) electin

g to do Sipjin and Taebaek.  We practiced with Master Nigel Hudson providing good feedback.  In the end, we only got to perform Taebaek and this part of the event was treated as just a practice run for the solo event and no results were given out.  For the solo event we competed by grade, with each individual choosing a poomsae.  For my group, the 6th Dans, we all elected to do Sipjin to give a better view and I was pleased to be able to put in a good performance.

The opportunity to compete at the Kukkiwon and to walk up the steps to the VIP box to collect a Gold Medal was definitely a highlight of the trip.  I was also honoured (at least I think so) with the award of a prize for being one of the ‘older’ masters to compete.

As with the previous camp, Monday was down for ‘Mountain Training’.  So we started the long walk from our hotel to the mountain, stopping off to do a short impromtu demonstration in Insadong.  Unfortunately the weather was very poor so the walk across Seoul was not as enjoyable as it could have been, and when we got to the mountain we discovered access was closed.  So then we headed back for a short visit to the World Taekw 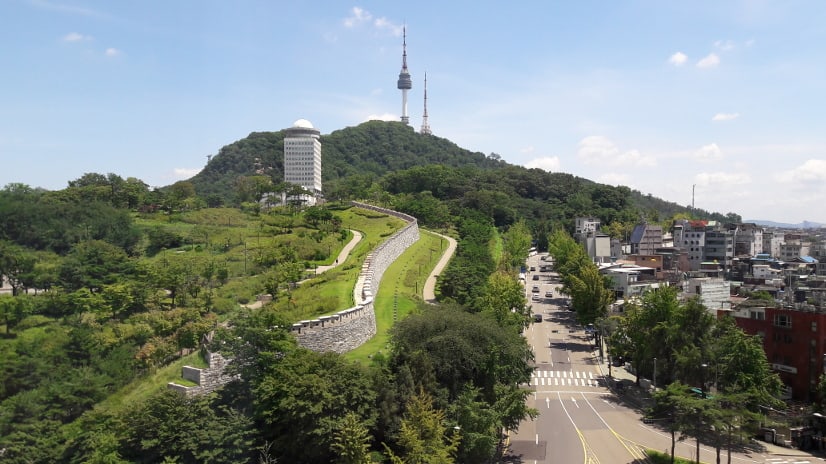 ondo (the new name for the World Taekwondo Federation) building from where the sport side of Olympic Taekwondo is managed, and then off to lunch.  Afternoon was a visit to Seoul Tower on top Namsan Mountain (but with a bus part the way up) and another impromtu demo!

Finally back to the hotel and off to an informal closing dinner at a local chicken resturant and goodbyes until next year.

I stayed on in Seoul to spend the next two days sightseeing and to do the mountain walking I missed out on. I also walking back up to Seoul Tower and watching a great martial arts demonstration of tradition swordand spear work.  So much history to see in this great city especially as the weather improved.

Planning has already started for next year.  It is expected that the 2018 Summer Camp and Competition will be 5 days long with a half day of training with a half day of free time on each day and a broader itinary adding in for example self defence.  Final dates will be known around Christmas time but expected still be mid-July.  So next year could be your chance to train in the home of Taekwondo!