We have had the following report from Sarisa following Neo Botha’s success in both Poomsae and Sparring at last weekends Korean Embassy Cup in Pretoria, South Africa.  Great to hear of our long standing club member Neo’s continuing success.

We had such a lot of fun this weekend.  We had a few hick ups with venues initially as the competition was supposed to have been held at the University of Pretoria’s sport centre but students are currently protesting raised university fees and they decided to change the venue on the day of the poomsae competition for security reasons.  After driving around to the Zwartkop airforce base gym and finding a stranded Botswana team bus there as well as some people from the Zimbabwe team, we made a convoy and eventually ended up at a church in Pretoria.  The Lesotho team got lost, the Mozambique team drove past in a different direction – it was chaos.  After eventually starting 3 hours later, the participants had to lay the mats quickly and thereafter things went a bit more smoothly.

Neo won a gold medal for the poomsae, although she says she is very rusty, she practised two weeks with her ipad coaching her at the kickboxing gym for an hour every day.

The next day however was lovely – they decided to have the sparring event at the Korean Embassy gardens in Muckleneuk in Pretoria – the jacaranda trees were all purple and the weather was great.

I don’t think they have realised how hot it gets – Pretoria is having a bit of a heatwave at the moment and it was about 35 degrees and the three mats were in the sun – the spectators had gazebo’s and water was distributed.  The Kukkiwon demonstration team had a 15 minute demonstration but the mats got so hot that they had to hose it down before the time but some of the team ended up with  blisters on their feet – they were very stoic about it though – after doing a kick or breaking a board they just hosed down their feet again….

The Korean embassy team ran around for about 2 hours with  buckets full of water to cool down the mats and then quickly had to mop it up again, until someone found the hosepipe.  That took a bit of time, finally they decided to remove the inner mats and the sparring continued on the grass. The Lesotho team was a lot of fun, they sang soft traditional songs and danced in a train formation when one of their team was up. 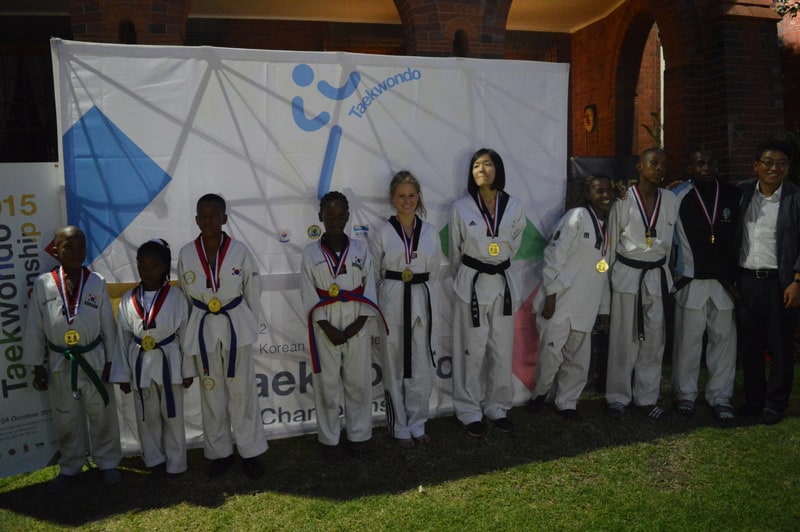 Neo was asked to do the Koryo with a Korean lady for demonstration purposes, got to meet the ambassador and sat in the VIP tent while waiting for the demo.  She was very chuffed and they looked lovely.

She got a gold medal for the sparring as well and the medal ceremony was in the evening, with little trays with medals and a present package for all the contestants.

It was great to be there – the Korean people were absolutely lovely and the teenagers even spoke a little bit of Afrikaans.