A small group from the club travelled the short distance to Aldershot for Spitfire’s Sparring Practice Day.   Once again Spitfire had organised a great little event that brought together a small number of friendly clubs to work on sparring development through 1-1 matches.   There was a good range of ages and experience level so matches were fair but challenging. 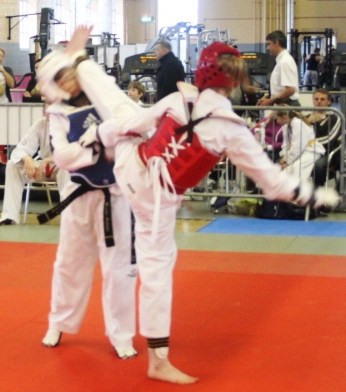 First up was Ibrahim, playing for the first time outside of the club.   He showed good composure and took an early lead, but then  dropped away.  However he showed excellent spirit to pull the score back to 11-12 but just ran out of time.   Great opening match.

Next was Alex Newman, the match started quite slowly with both players looking for openings and trying to stay safe, however gradually the scores came and for a while the match was tied at 3-3, however Alex then opened up winning 8-3.

Alex Stock then followed in a close fought match, with a lot of scores but unfortunately left a gap for a headshot so despite showing good movement and speed, the final score was 8-12.

Neo was the last of our cadets.   Unfortunately for Neo she was much smaller and lighter than any of the other cadet females so she faced a much taller and heavier experienced player.   However with the attitude we have all come to expect from Neo this didn’t deter her and she came out fighting.   Neo took the first point and then the match move forward very evenly until the last few seconds when Neo landed a headshot and so won 7-4.

On to the juniors, and our one competitor in this group was Amy.  From the very first second it was obvious that Amy was really on fire today and she went in with a blistering set of kicks finishing with a fine headshot and a quick 8-1 win.   Without question Amy’s best match.

Final player of the day for OBTKD was Jamie Froude.   This was Jamie’s return to the ring after several years out and he was keen to play despite a strained hamstring which require plenty of treatment both before and after the contest.   This was a very even match and eventually ended up tied at the end of the final round, so providing the tension of Golden Point.   Fortunately on this occassion, timing and luck were with Jamie and he won the Golden Point.

Well done everyone.  Your played fair and with spirit.

Thank you also to the club players who also helped out with corner judging, and Ian Stock for the photography.