We just wanted to confirm that as usual all our regular classes, for all age groups, will run throughout the summer; no changes to schedule except for the week from the 19th to 26th August when we will be shut for a short summer break.

We would like to thank our members and their family and supporters who have attended recent tournaments representing Bluewave. We know that at some recent tournaments there have been some negative situations that have occurred and we are very proud of how the Bluewave team have handled these situations with respect and with consideration of others. These values, along with the welfare of our members, are of the upmost importance to our club and coaches and we can assure you that we have provided necessary feedback to the tournament organisers.

We fully understand how some of the negative situations can impact not just those competing but also those supporting their family and friends at the tournaments. We want to ensure that we can continue to attend tournaments to give those who want to compete the experience they need and also the enjoyment they deserve. With this in mind we would like our next tournament focus to be the UTF London International at Lee Valley Athletics Centre on the 30th September. This tournament is one that our coaches and members have attended on multiple occasions and is always and positive and friendly tournament for all.

As a gesture of appreciation for how our members embodied our positive values at recent tournaments, we would like to offer to pay the entry fee for any competitor so wishes to compete at the UTF London International, who previously competed at either the Chungdokwan National Championship and/or 1st Welsh Open. If you would like to compete at this tournament please email us (This email address is being protected from spambots. You need JavaScript enabled to view it.) ASAP as entries are already filling up.

Over the last four years we have double the size of the Bluewave membership.  This is a tremendous achievement especially for a non-for-profit club. However, we have now reached the point that we can not expand any further, and welcome more students to Bluewave, without additional instructors and assistant instructors, particularly in the Junior/7-11 age group classes.

If you are a Blue Belt or above aged 14+ then there are opportunities for you to help us grow Bluewave further and in doing so you will also be able to develop your own Taekwondo skills and knowledge.

What will you be expected to do?
- Commit to regularly assisting in one (or more) of our classes
- Support the main class instructor by taking small groups as well as assisting with the general running of the classes
- Be a role model to the students in the class

What you will get in return?
- The chance to help Bluewave continue to expand and develop
- A deeper understanding of your own Taekwondo from teaching others
- Support with your own sport coach development
- Bluewave will pay for you to attend First Aid Training, Safe Guarding Training, British Taekwondo Coaching Courses and if you are interested British Taekwondo Poomsae and Sparring Referee/Judging Courses

If you are interested in the opportunity to be an assistant instructor, or have any questions, please talk to Lynne, Coleen or Gerry.  With your support we can continue to develop Bluewave as one of the leading Taekwondo clubs in the South of England. 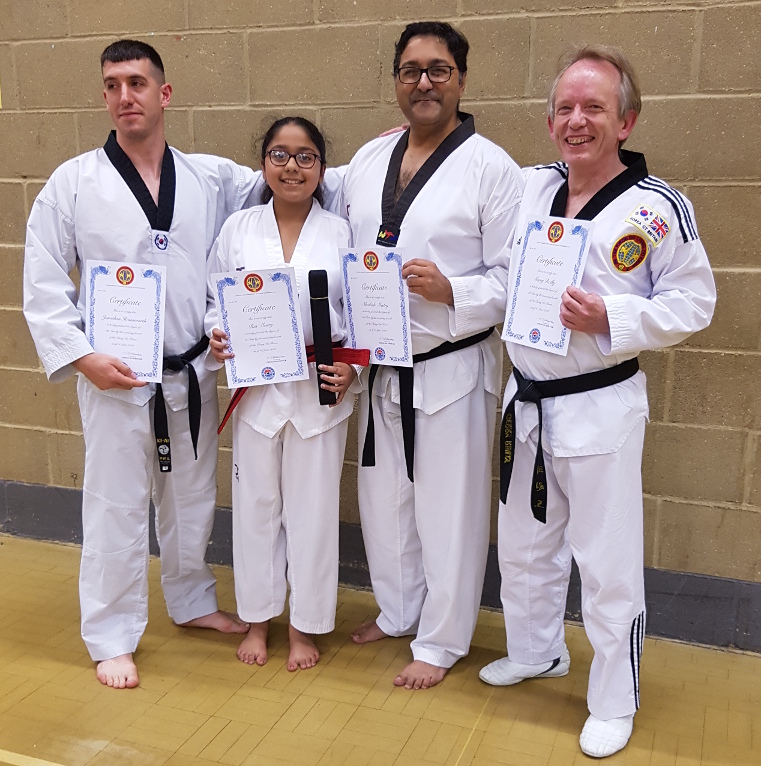 Congratulations to the Bluewave candidates at the Taekwondo Chundokwan GB dan grading on the 10th June.  Promoted were:- 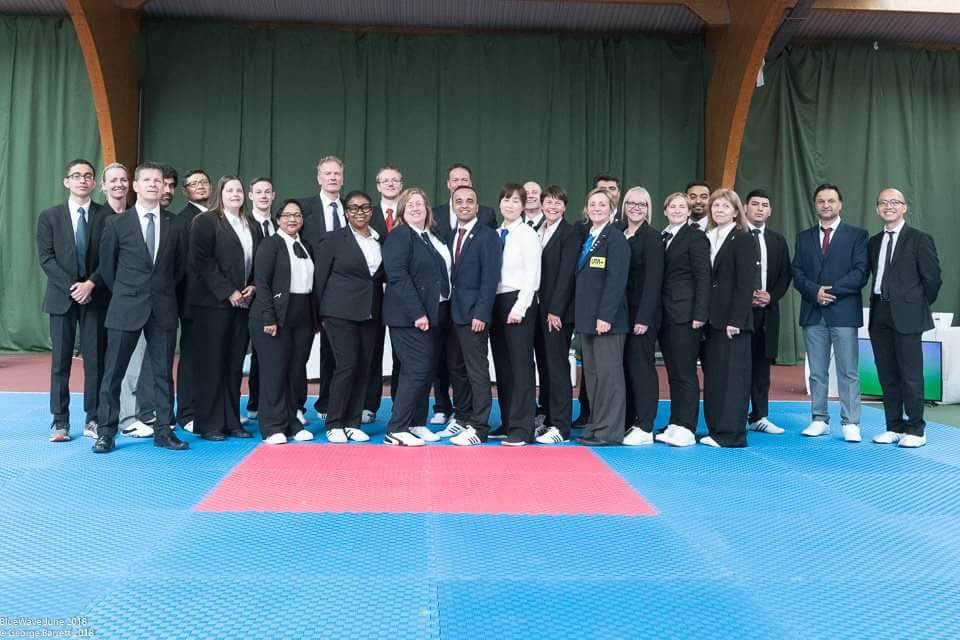 We would like to say a big thank you to everyone who made yesterday's Bluewave Poomsae Championship a great success.  It was a very busy day with over 400 competitors of all ages and levels of experience.  The standard of performance was high with good spirit, conducted in a friendly and positive atmosphere.  Thank you to our VIPs who attended, Shirley Stapleton representing the Board of British Taekwondo, Amy Sambell representing Basingstoke and Deane Borough Council, Grandmaster Mark Biddlecombe as President of Taekwondo Chungdokwan GB and Master Gemma Biescas as Head Performance Coach for GB Poomsae.  Thank you also to Mar 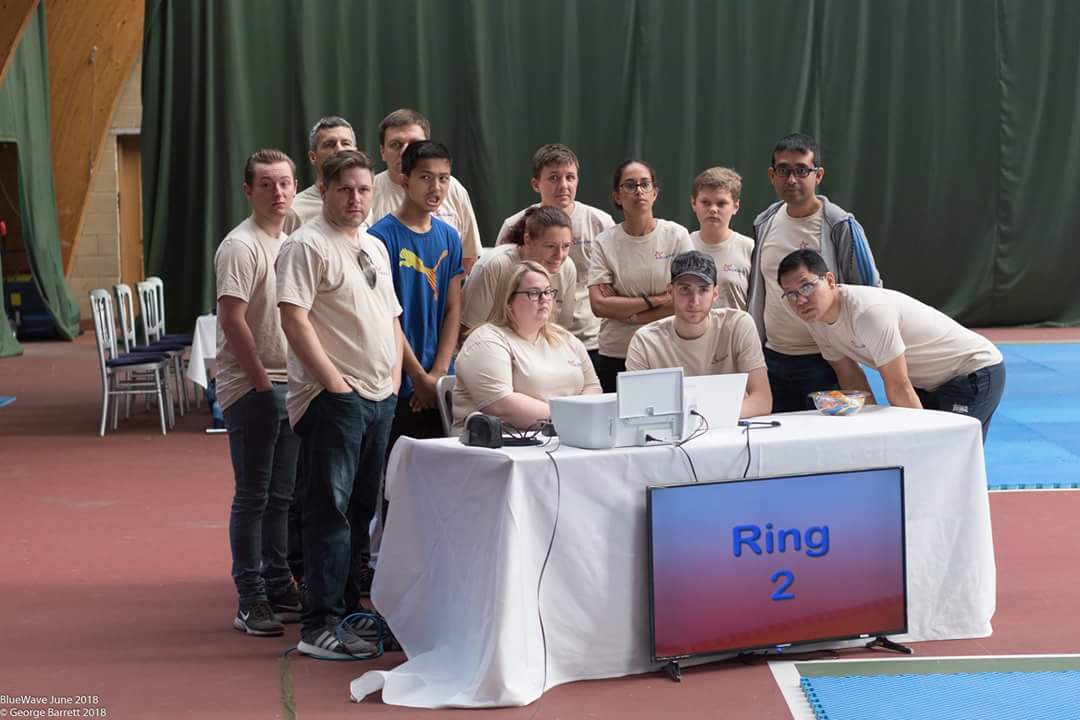 k and Josh from NTC for the mats, scoring equipment and the hardwork (and humour) across the weekend.

Well done to the Bluewave competitors, good to see more out competing and we look forward to build on this for the future.  Congratulations to our medal winners; Gold Master Graham Jones 66+ Dan Male, Gold Jonny Hainsworth U40 Dan Male, Gold Pradeep Lalung K1 2nd Senior Male, Gold Ethan Gore Peewee Para Male and Bronze Hannah Seddon K2 1st Senior Female. There were also many other improved performance for our competitors quite a lot of whom were competing in new and more senior divisions.

As this is Volunteers' Week we would particularly like to thank the two groups of volunteers who were vital to the success of this tournament.  The referee/judges team under the guidance of Head Judge, Grandmaster David Bailey, who worked incredibly hard across all four courts. Many of the judges were less experienced and stepped up to ensure a good standard throughout a long (and very hot) day.  Grandmaster Bailey made a special award for Referee of the Day to Adam Donley for his dedication leading the team on Court 4.  We would also like to thank the large team of volunteers from Bluewave and other local clubs who assisted with the setup on Saturday, running the tournament on the Sunday and then takedown on the Sunday.  The team worked amazingly hard over the weekend, thank you!!!

Final thank you to all the clubs, instructors, competitors and supporters who attended.  I hope you all had a good day and enjoyed the competition!

Green Belt and above only