We decided not to run a senior grading training session in August as it would have been on the bank holiday weekend and lots of people are still away enjoying their holiday break.

However to make up for this we will be running two sessions in September, which is particularly important for those who wish to be considered for the dan grading on the 13th October.  The September sessions will be;

Open to red belt / 2nd kup and above.  Free to Bluewave members and open to other British Taekwondo members at just £5.

We have made a few updates to the calendar for the second half of the year.  Please check the latest dates here.

It was great once again for Bluewave members and instructors to have the opportunity to train in the home of Taekwondo, Korea, and with some of the world’s leading authorities in the different aspects of our martial art and sport.

We travelled out for the trip on Tuesday 16th July using Asiana Airlines for the first time.  Good experience; so maybe airline of choice for next year!  We arrived at Incheon Airport late afternoon on Wednesday 17th for a rather slow trip into Seoul to meet up with other Chungdokwan members from around the world for registration and a first group dinner.

Training started on Thursday 18th at the Korean National Sports University.  The morning was 3 hours of physical training and basics followed by an afternoon of work on sparring and Taekwondo spirit.  Returning to the hotel tired and definitely ready for dinner.

The morning of Friday 19th focused on poomsae techniques especially power generation, working from Il Jang through to Sipjin, followed by an afternoon of great self defence work.  We were also privileged to have Chungdokwan Kwanjangnim GM Park Hae Man popped in to watch the training.  Certificates were then awarded to recognise the senior dan grades include Bluewave’s Master Gerry Reilly as 2nd Class WTCF Instructors.  After training we returned briefly to the hotel before heading out for the formal seminar banquet.  The UK contingent had a great evening celebrating on our table shared with Norway and Ethiopia.  Certificates were then awarded recognising the 3rd Class WTCF Instructors including Master Lynne Firth and Pradeep Lalung. 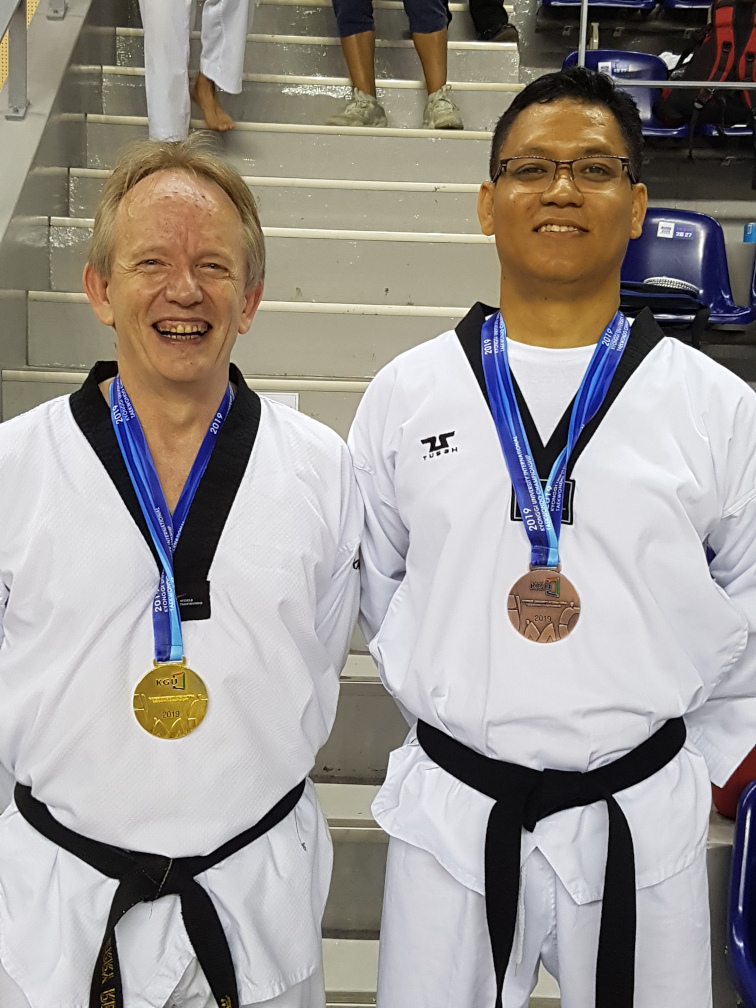 y 20th was competition day and so we headed over to Yong In University for the 3rd Kyonggi University International Taekwondo Championships.  However, our duties weren’t to start with the competition. First we were the flag carriers for the opening ceremony and then we all gave a demonstration ahead of the main show which was an amazing display by the 1st Army Taekwondo Demonstration Team.  Then we were into competition.  Master Gerry Reilly and Pradeep Lalung competed in the Poomsae, with Pradeep winning a bronze in the U40 Male division and Master Gerry winning the U60 Male division.  Great time had by all.

Sunday 21st was to be a break from training (or at least Taekwondo training).  After meeting up with the other teams, we headed together to first pay our respects at the grave of the 3rd Kwanjangnim of the Chungdokwan, GM Uhm Woon Kyu.  This was a solemn visit to remember the incredible contribution that GM Uhm had made to the development of the Chungdokwan and of modern Taekwondo.  After this visit, we headed up to the demilitarised zone (DMZ) to gain a deeper understanding of the cultural impact of the continued separation of the Korean people.  We then headed back towards 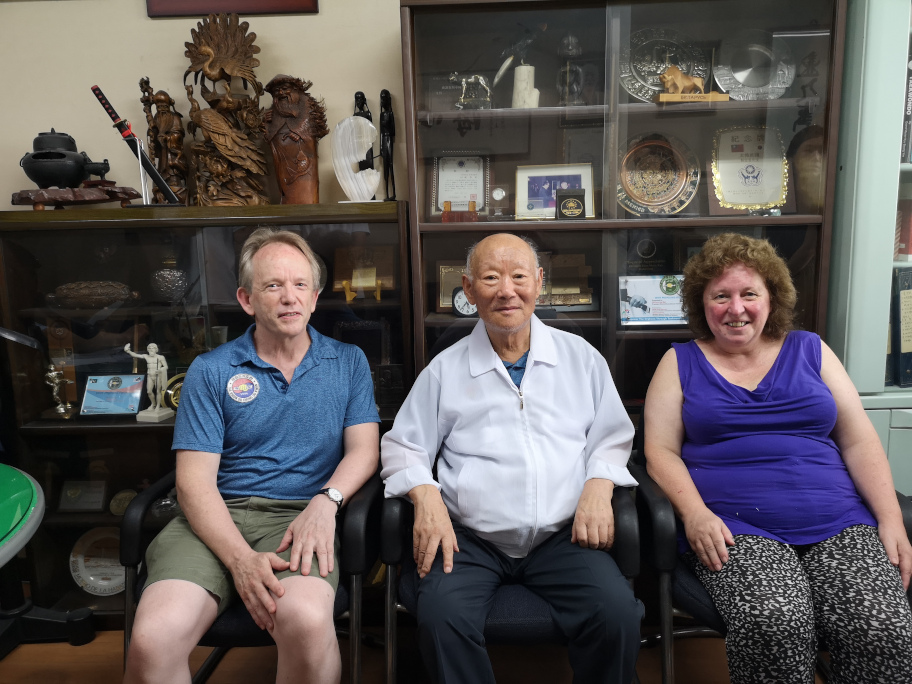 Seoul.  This time we split into two groups, one going off to visit several beautiful temples and another climbing the Baegundae Peak of Bukhan Mountain.  This proved to be a challenging climb as the weather was poor but there was a small group made the summit.

The final official day of the seminar was on Monday 22nd with a visit to the Kukkiwon, the World HQ of Taekwondo, for some more Poo 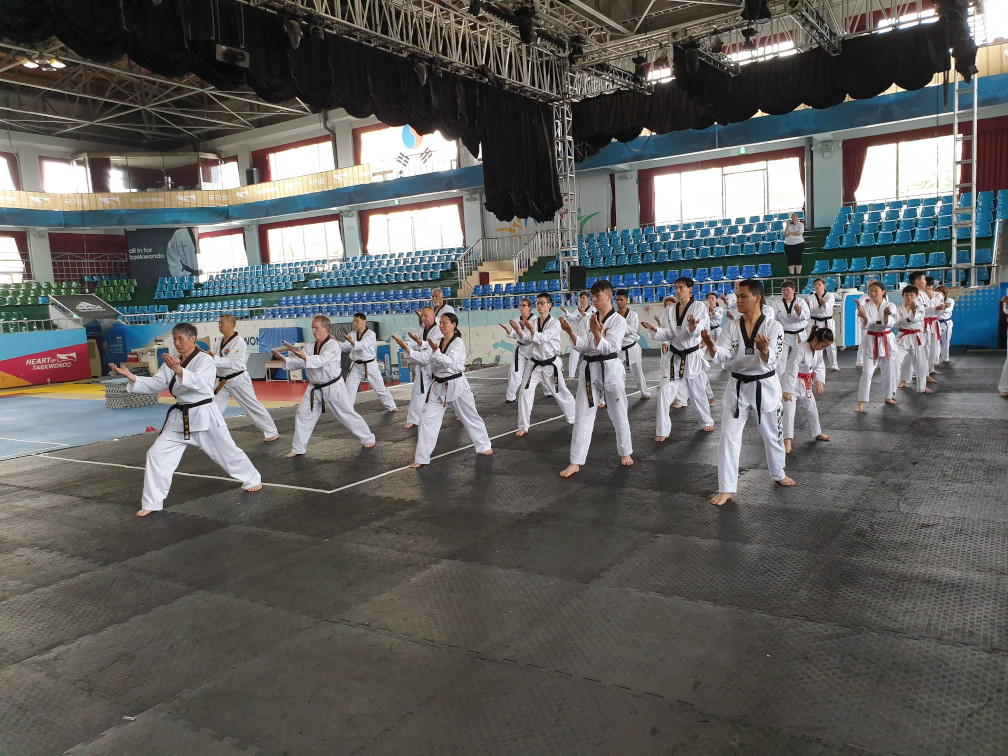 msae training this time focused on the high Poomsae from Jitae to Ilyo and then the final group photos.  Master Gerry Reilly and Master Lynne Firth then headed up to the Chungdokwan offices to meet with GM Park Hae Man and to pass on our respects.  It was great to see GM Park and to spend time with him looking over photos from past events and reminiscing about his many trips to England and to our dojangs.  Then it was time for shopping and a quick change over to our new hotel in the tourist area of Seoul.

The final two days of the trip were then a restful time for sightseeing and more shopping, and the unexpected opportunity to catch up with our friends from the UTA Northern Ireland who were staying at the same hotel in Insadong.  All too quickly, Thursday 25th July and it was time for us to return to the UK after another great trip to Korea.

We are already starting to plan for 2020.  Dates will be confirmed early in the new year, but we expect it to be again during the 2nd half of July.  Costs for flights, hotels, transportation and training will be approximately £1,250.  The trip will be open to 16+ Dan Grades, and we are happy to include both Bluewave members and also those from the other clubs we collaborate with.  If youare interested, please do let us know (This email address is being protected from spambots. You need JavaScript enabled to view it.).

Many thanks to Grandmaster Shin Byeong Hyun and the other instructors who lead the training and to Master Sheamus O’Neill from Ireland who did his usual amazing job of coordinating activities and the international participants.  We look forward to seeing both again at the Chungdokwan Open in Ireland in October.

We will be running a Dan grading on Sunday 13th October.

This grading will be for candidates for 1st to 4th Dan and will be held our dojang in Basingstoke. We welcome candidates from both Bluewave and other British Taekwondo clubs. If you would like an electronic copy of the syllabus or entry pack please send an email to This email address is being protected from spambots. You need JavaScript enabled to view it..

We are planning to attend two international poomsae tournaments in the Autumn:-

If you / your children would be interested in competing at either of these events please let us know asap.  We will be looking to book flights and hotels in the next couple of weeks.

Key focus event.  Suitable for all levels of experience.

Family class open to all ages 7+.  Ideal for parents and children wanting to train together.

Senior belt training focused on technical development of poomsae, one-step and self defence.

Open to 2nd Kup / Red Belt and above.

Free to Bluewave members, £5 for other BT members.